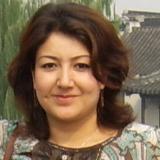 Biography: Gulmira Imin is a Uighur Muslim and served as a government employee in Urumqi, the capital of the Xinjiang Uighur Autonomous Region in northwest China. In spring 2009, Ms. Imin became the moderator of Salkin, a Uighur-language culture and news website to which she had previously contributed poetry and short stories and had been critical of government policies in her online writing.

On July 5, 2009, Ms. Imin participated in a demonstration protesting the deaths of Uighur migrant workers in Guangdong Province.  Initially peaceful, the protests turned violent, with about 200 people killed during the riots and confrontations with police.  On July 14, 2009, Ms. Imin was arrested in Aksu after authorities alleged she had organized the protests, posted an announcement for them on Salkin, and leaked state secrets by phone to her husband in Norway.  Her family was not notified of her arrest, and was unaware of her location until the October 2009 airing of a China Central Television documentary that depicted Imin in prison garb.

On April 1, 2010, the Urumqi Intermediate People’s Court sentenced Ms. Imin to life in prison under Articles 103, 111, and 296 of China’s Criminal Law on charges of “splittism, leaking state secrets, and organizing an illegal demonstration.” She alleges she was tortured and forced to sign documents while in detention.  She reportedly was not allowed to meet with her lawyer until the trial. Her appeal subsequently was rejected. Ms. Imin is currently detained in the Xinjiang Women’s Prison located in Urumqi, where she is allowed one family visit every three months.